Hamburger Cavez is the thirteenth episode of The Problem Solverz. 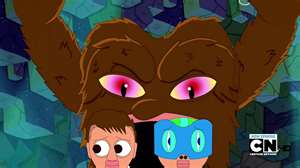 In this episode, Horace and Roba want to go camping, but Alfe wants to stay and eat hamburgers. Horace and Roba force him to come, but Alfe keeps begging for hamburgers. He finds an owl and thinks it might have "Owl Hamburgers", so he chases it into a tree where he finds the Ghost Demon Windigo. When Roba ends up falling in, Horace comes in as well, and finds out the Demon possessed Alfe. They get him out by making Alfe throw up, and they get rid of Windigo, and Alfe goes back to eating hamburgers.

Retrieved from "https://problemsolverz.fandom.com/wiki/Hamburger_Cavez?oldid=9339"
Community content is available under CC-BY-SA unless otherwise noted.